The 2013/2014 end of school-year party took place, for the first time, at the new Creche e Aparece facilities with the enthusiastic participation of all the families. All classrooms participated with a theme/story and after the preparatory rehearsals the children were true artists. 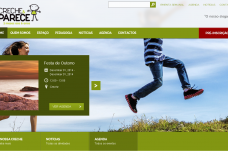 As of November 2014, Creche & Aparece introduced its new, updated, dynamic website, more in line with the current reality of Creche & Aparece. The new website allows parents to easily access the school's essential information and better understand the daily life of the institution. 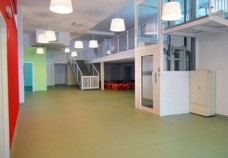 After 3 school years in the south of Parque das Nações, in August 2013, Creche e Aparece moved to a bigger facility with the possibility of having a kindergarten (until age 6). The new installations provide optimal physical conditions for the children – the area has plenty of space and natural light, with great structural diversity adapted to children of all ages, as demonstrated by the ample multipurpose space and the two outdoor areas. 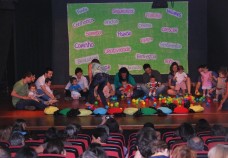 End of 2011/2012 school-year party at IPJ in Parque das Nações with the participation of all the families … true artists. 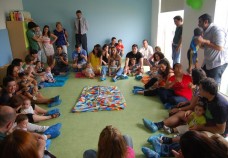 The first Creche e Aparece party at the old installations. Fantastic socializing with all!

In August 2010 Creche e Aparece opens its doors as a nursery (up to age 3). Creche e Aparece, in excellent repair, with a motivated team, an innovative pedagogical project and a great willingness to make a difference, quickly became a reference for pre-school education at Parque das Nações.